Home » Blog » Affordable LED Adoption is NOT an Oxymoron

Affordable LED Adoption is NOT an Oxymoron 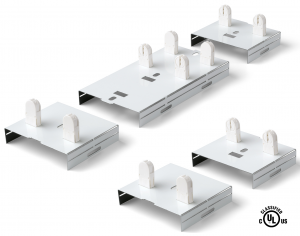 The biggest obstacle standing between LEDs and building owners right now is expense. LEDs are more expensive than CFLs, but prices continue to come down. When focused on price, you need to consider the savings in not only energy expense, but also the reduction in maintenance expense when weighing a decision to switch to LED.

Then there’s the initial expense of un-installing old fixtures and installing new fixtures that accommodate LED lamps. Our brilliant engineer is adamant about saving customers time and money. He came up with a way to retrofit existing four-foot and eight-foot T8 or T12 strip-light fixtures for use with linear LED engines that is fast, easy and inexpensive.

It’s all due to two new part options (14070 and 14076) for making our T8 Linear Fluorescent RetroFit Conversion Kits suitable for use with linear LED engines (T8 shaped LED tubes) that are classified per UL 1598C.