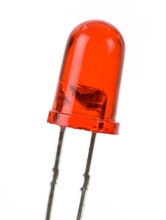 In addition to overcoming early performance problems with heat, moisture and color, improvements in LED technology have significantly lowered the cost of LED luminaires and lamps. Not only are today’s LEDs more energy efficient as a light source compared to the 1980’s when they were used as equipment indicators, but also produce more lumens per watt. Energy Star LEDs are rated at more than 100 lumens per watt. And the U.S. Energy Information Administration estimates that lumen production will continue to improve to more than 150 lumens per watt by the year 2020. To fully appreciate this technology growth, consider that a 60-watt incandescent lamp produces an average of 16 lumens per watt, and the equivalent Compact Fluorescent Lamp (CFL) provides an average of 67 lumen per watt.

LED lamps now come in a variety of color temperatures and options that provide custom tones, including warm, incandescent-like and cool, blue tones.

In the last four years, costs have dropped from more than $60 per lamp to less than $15 per lumen, according to the EIA. Plus, there are more energy-efficiency programs, rebates, and incentives that help lower the total installed cost of LED lamps. Learn about incentives and rebates in your area at www.dsireusa.org.

In addition to the many key attributes of LED lamps and the lower- costs, manufacturers have improved the performance and quality of LED luminaires. For example, vapor-tight LED luminaires provide advanced thermal dissipation that reduces harm caused to the lamps by surrounding heat, as well as optimized light output suitable for operating indoor, outdoor, “wet”, and specialty locations such as parking garages.