Defining the Life of White LEDs 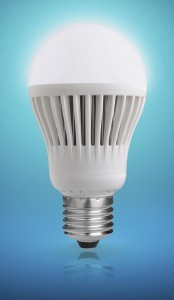 One of the main benefits of LEDs is their very long life. But just how long do LEDs really last—50,000 hours or even 100,000 hours? What is the useful life of an LED?

Over time, all electric light sources experience a decrease in the amount of light they emit— lumen depreciation. A very basic incandescent filament will evaporate over time, with output declining from 10-15% over the 1,000-hour life of an incandescent lamp. Compact fluorescent lamps (CFLs) generally lose no more than 20% of initial lumens over their 10,000-hour life. High-quality linear fluorescent lamps (T8 and T5) will lose only about 5% of initial lumens at 20,000 hours of operation.

The primary cause of lumen depreciation in LEDs is heat generated at the LED junction. Without adequate heat sink or ventilation, device temperature rises, resulting in lower light output. Continuous high temperature operation will cause permanent reduction in light output. LEDs may continue to operate even after their light output has decreased to very low levels.

So what is an acceptable level of lumen depreciation? For general lighting in an office environment, light level reductions of up to 30% are accepted with little notice, particularly if the reduction is gradual.

Most manufacturers of high-power white LEDs estimate a lifetime of around 30,000 hours to the 70% lumen maintenance level, assuming operation at 350 milliamps (mA) constant current an maintaining junction temperature at no higher than 90°C. However, the thermal robustness of LEDs continues to improve, allowing for higher drive currents and higher operating temperatures.