Home » Blog » CFLs vs. LEDs: Illuminating the good, the bad, the confusing

CFLs vs. LEDs: Illuminating the good, the bad, the confusing 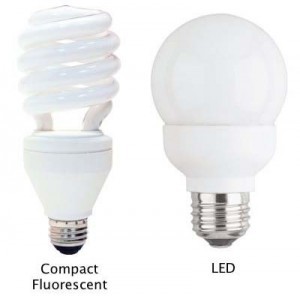 CFLs and LEDs have found the spotlight (and scrutiny) with the impending disappearance of incandescents. Nearly everyone finds a reason to complain about these newer lamps and stock up on incandescents. Bad experiences and rumors have caused prejudice and shortsightedness among facility managers and consumers. Here’s an update to share.

CFLs in their early years flickered shed poor color, powered up slowly and couldn’t dim. The tiny amount of mercury in them raised safety issues about breakage, but you don’t need a HazMat to clean up. Today CFLs are high quality, reasonably priced, have excellent light color, don’t flicker, don’t need time to warm up, and are dimmable in standard fixtures. They don’t put out 90 percent of their energy as heat like incandescent lamps, so air conditioning costs are lower when the lights are on.

If customers want something that resembles incandescent lamps, recommend CFLs with a color temperature of about 2700 degrees Kelvin for a nice, warm, familiar colored light. They will use about 75 percent less energy and last about 10 times longer than their predecessors.

We’ve been looking at LED electronic, solid-state lighting for years in clock radios, microwaves, etc. The technology has advanced far enough to provide interior lighting, but not all are quite ready.

LEDs don’t have any mercury in them, and they generally don’t break like incandescent bulbs. They last a really long time—around 30,000–50,000 hours, compared to about 10,000 for CFLs and about 1,000 for incandescents. Their efficiency is similar to CFLs, and getting better all the time. LEDs are getting pretty close to CFLs and incandescents in light quality, but it may take effort to find something aesthetically pleasing. While they are more expensive, prices are coming down.

Clear up the confusion

Emphasize that incandescent lighting is an obsolete, inefficient technology whose time has expired. Price: LEDs are more expensive, but they last longer, so customers end up even or better in the long run over CFLs. Aesthetics: Choose from many options of ENERGY STAR labeled lamps. Refer to the Lighting Facts label, a sort of “nutrition label” for lamps that includes the energy used in watts, brightness in lumens, estimated yearly energy costs, lamp life, and the light appearance—valuable information for comparing different lamps.